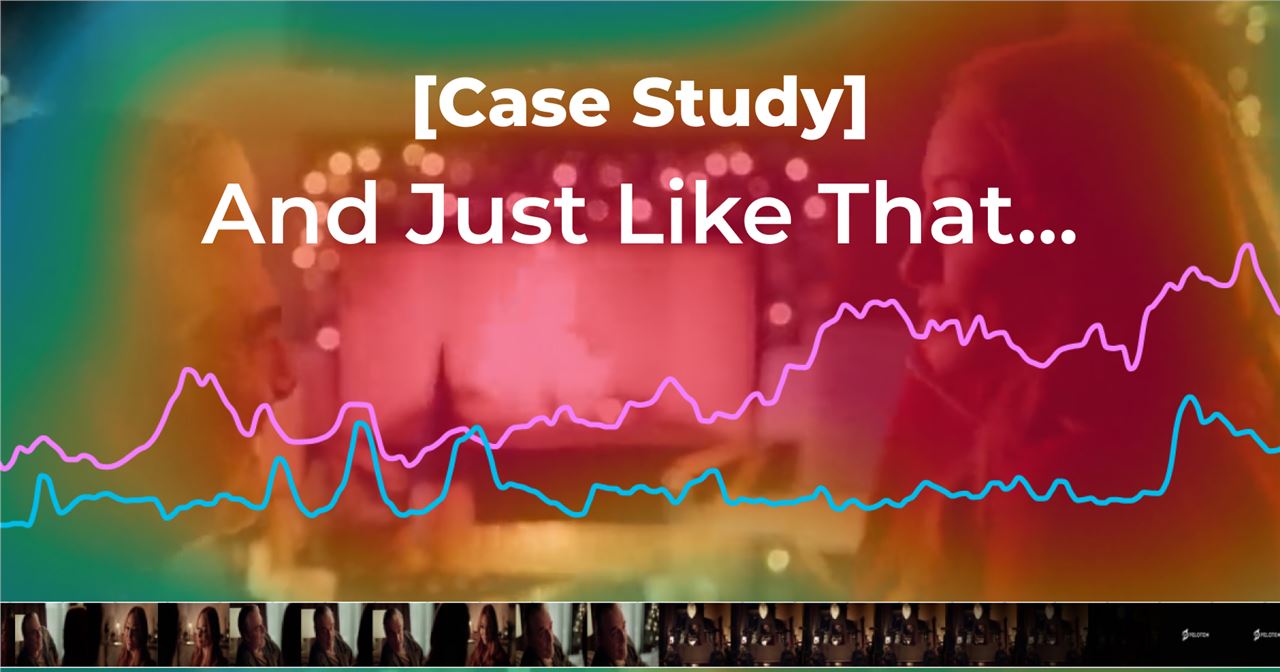 Did Peloton just experience the worst product placement in history?

Peloton reacted fast with the ad 'He's Alive' to avoid potential brand damage after the product placement. Did it help? Let’s figure it out.

Attention: Big spoiler alert for all 'Sex and the City' fans who haven't watched the first series of 'And Just Like That…’ TV show yet.

Even if you haven’t seen the episode, you’ve probably heard about the recent product placement wreck involving ‘Mr. Big’ and his Peloton exercise bike. This created not only potential damage to the Peloton brand, but its publicly traded stock tumbled significantly as well. So we wonder, just how strong is this connection between inappropriate product placement and damage to the Peloton brand?

Let's start from the beginning

All 'Sex and the City' fans looked forward to the sequel called ‘And Just Like That…’ to meet all their favorite characters (except Samantha - a bummer she didn’t return).

The first episode was intriguing not only to see all our favorite characters after so many years but also because of the surprising death of the love of Carrie’s life, Mr. Big.

How did he die? Well, he had a heart attack after a workout on his Peloton exercise bike. During the two days of the series launch, Peloton shares fell 15.3%. Such a great product placement, isn't it? 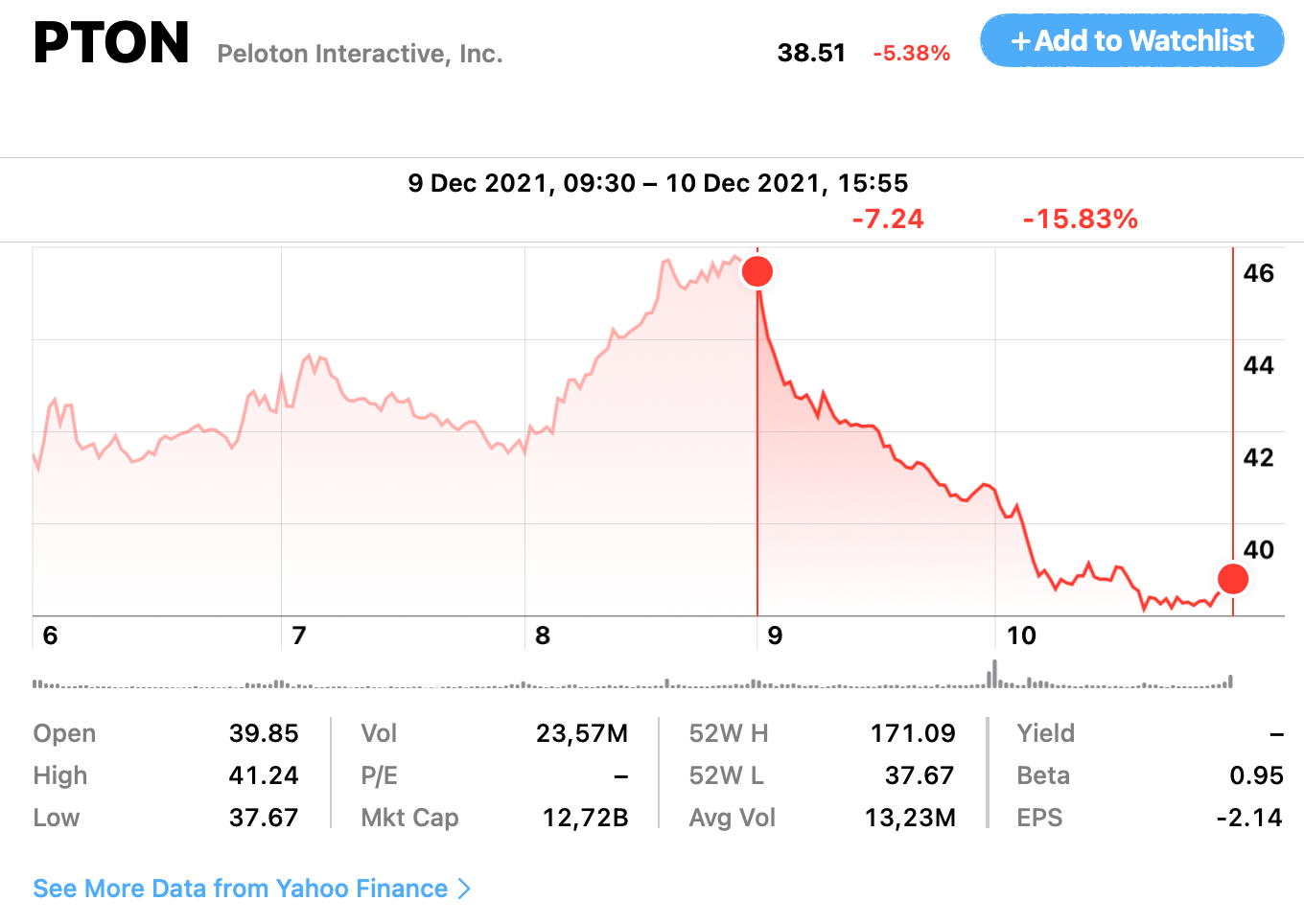 According to Yahoo Finance

So, let’s have a look at what happened

Yes, it is a sad fact - Peloton played an indirect role in the demise of one of the most iconic romantic leads in TV, which put the brand in an awkward position. However, it's crucial to mention that Peloton said they KNEW NOTHING about Mr. Big's death; they were not aware of the plotline because of confidentiality requirements on the script. The brand coordinated with HBO on the placement of the bike but did not pay for the product placement. What a bargain, right?  However, they claim they didn't know exactly how their bike was going to be used. So, we would imagine that somewhere within Peloton HQ, marketers and execs may have had their own cardiac event after watching the episode with Mr. Big's death.

In a panic, marketers from Peloton immediately launched the ad 'He's Alive' in an effort to undo the brand damage and cheer up upset fans who responded negatively over Mr. Big’s death. In this video, we see a resurrected Mr. Big with the title 'And just like that ... he's alive'. In this ‘recovery’ ad, Mr. Big (aka Chris Noth who is 67 yrs old) seems to enjoy the company of a 30-something ‘riding’ companion. So . . . Mr. Big is still alive but left his wife, Carrie Bradshaw, for a younger woman??  It was not the best move for Sex and the City fans, considering the history of Carrie and Mr. Big. But it's for you to judge :)

UPD. A bit later Peloton had to pull this ad because star Chris Noth was accused of sexual assault by two women. But you still can watch this video with eye tracking and emotion measurement data on our Youtube channel.

This is not the first advertising blunder for Peloton.  Remember the woman who was already stick-thin but was riding her Peloton to lose even more weight? Remember that backlash?

So, our question is . . . what really is the impact on Peloton’s brand with this most recent ‘Big’ blunder.

To answer this, we conducted a study using both online surveys and neuromarketing tools that allow us to capture people’s nonconscious reactions. Why measure nonconscious reactions? With any socially charged or widely discussed topic, people often give stated answers that could be formed by social pressures or other people. At the same time, their ‘real’ attitude could be different.

We used the implicit research method to determine whether Peloton’s poor product placement caused damage to the Peloton brand or category. At the same time, we researched whether the company's lightning-fast response - the video 'He's Alive' - helped the situation or added fuel to the fire.

A bit of boring but necessary research methodology background

Time from study idea to insights: less than 24 hours

Group #1: Did not watch the first episode of ‘And Just Like That..’, and were not exposed to the 'He’s Alive' ad.

Group #2: Watched the first episode of ‘And Just Like That..', and were not exposed to the 'He’s Alive' ad.

Group #3: A combination of those who watched the first episode and those who did not, with all exposed to the 'He’s Alive' ad.

A few more details about our respondents:

How big is Mr. Big’s death?

When we ran this study, one-third (35%) of all consumers had already heard that Peloton stock fell due to this case. And among all consumers, only 20% have seen the ‘Sex and the City’ Reboot series. We recruited a boost sample to have 110 consumers who’ve seen the new series to measure their reactions.

We discovered that the overall attitude towards the brand (Brand Emotional Appeal) has not significantly changed (see chart 1), yet there are directional differences in the Affordable and Harmful brand associations that warrant further research. Consumers who have watched the new ‘And just like that…’ series tend to lose their implicit confidence that Peloton is not harmful. 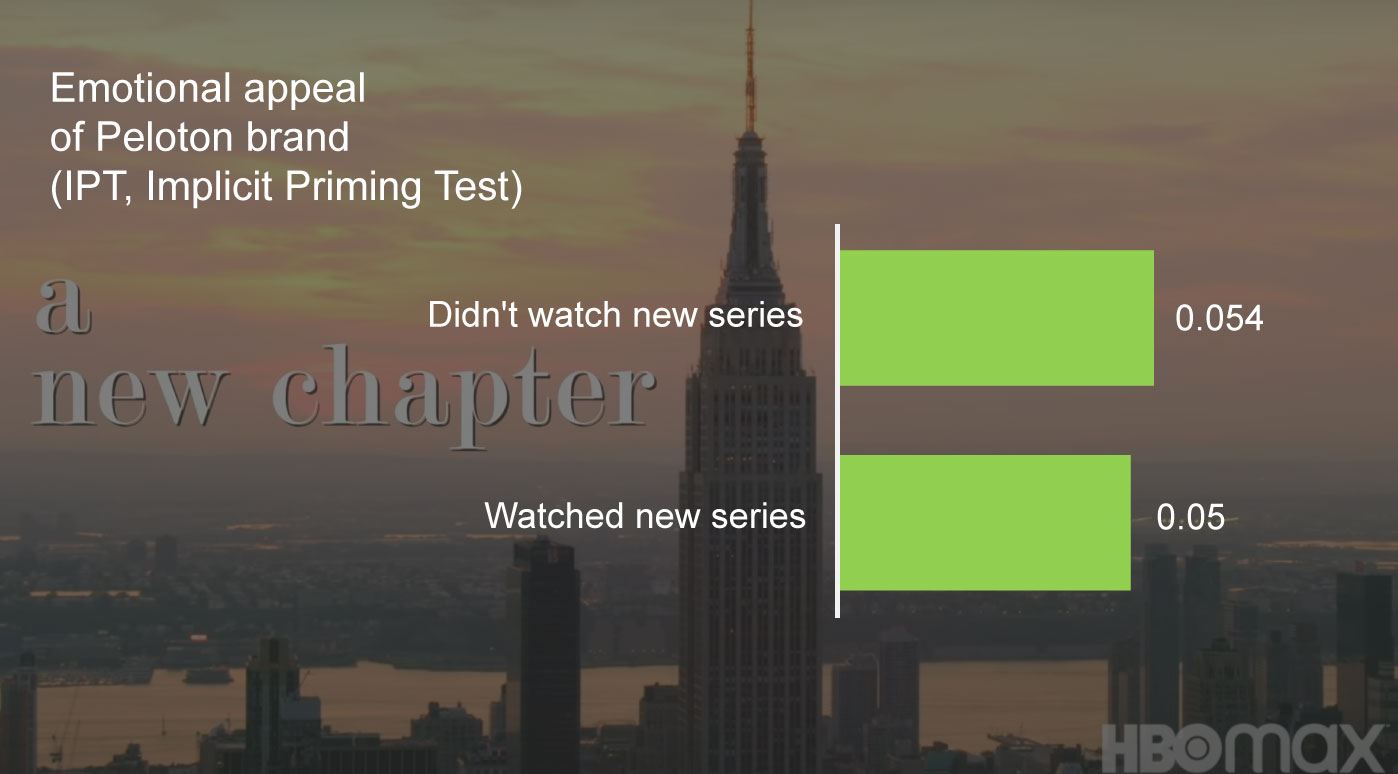 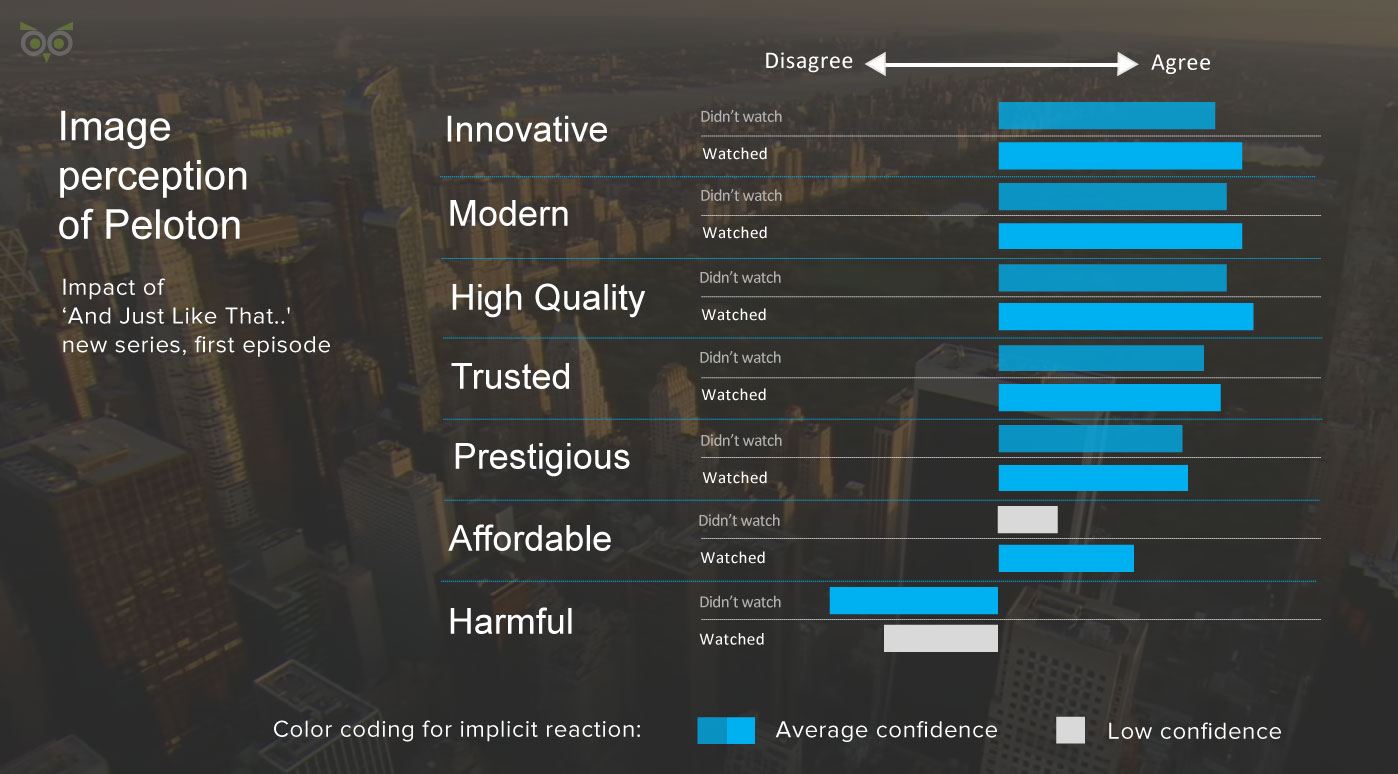 From this date, it doesn’t appear that the potential negative impact is so significant.

We also checked results for different groups and didn't find significant threats for Peloton brand users and other audiences.

So was Peloton's response reasonable, then?

How well does the 'He's Alive' campaign fit the mission to protect the Peloton brand?

To understand the potential impact of this campaign, we used implicit testing and measured people's attention and reactions using webcam eye-tracking and facial expressions analysis. This allows us to uncover what users see and feel behind their conscious control.

We also checked traditional survey questions and everything looked pretty good - the ad is perceived as likable, clear, and believable. However, as we dive into the implicit (nonconscious) reactions, we see a different story. 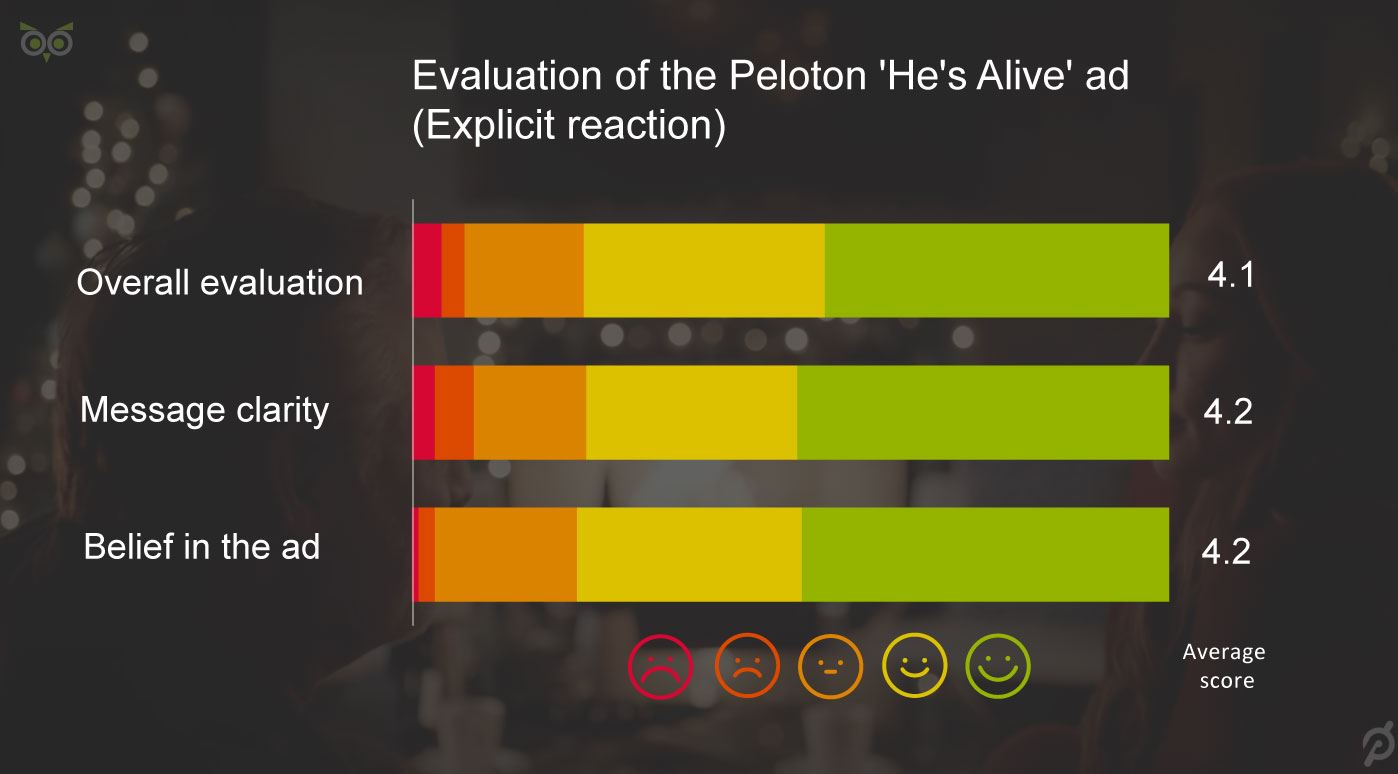 After reviewing the survey results, we analyzed the implicit results and discovered a different story. Among people who watched the ad, the brand's emotional appeal (brand attractiveness on an implicit level) became worse compared to the audience who never viewed it.

We also see this ad slightly reduced both emotional valence and arousal, not a good sign for the brand. 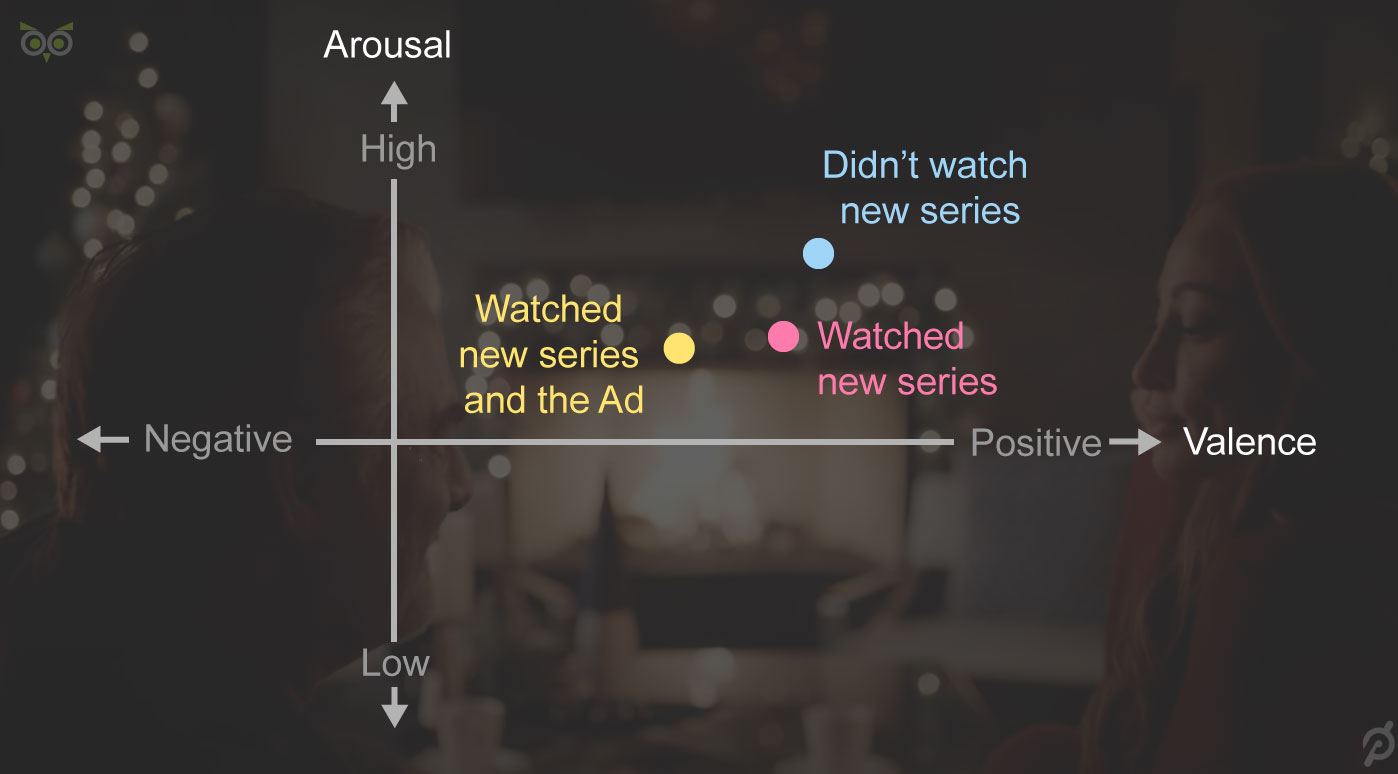 Why do the survey and implicit results indicate different findings? 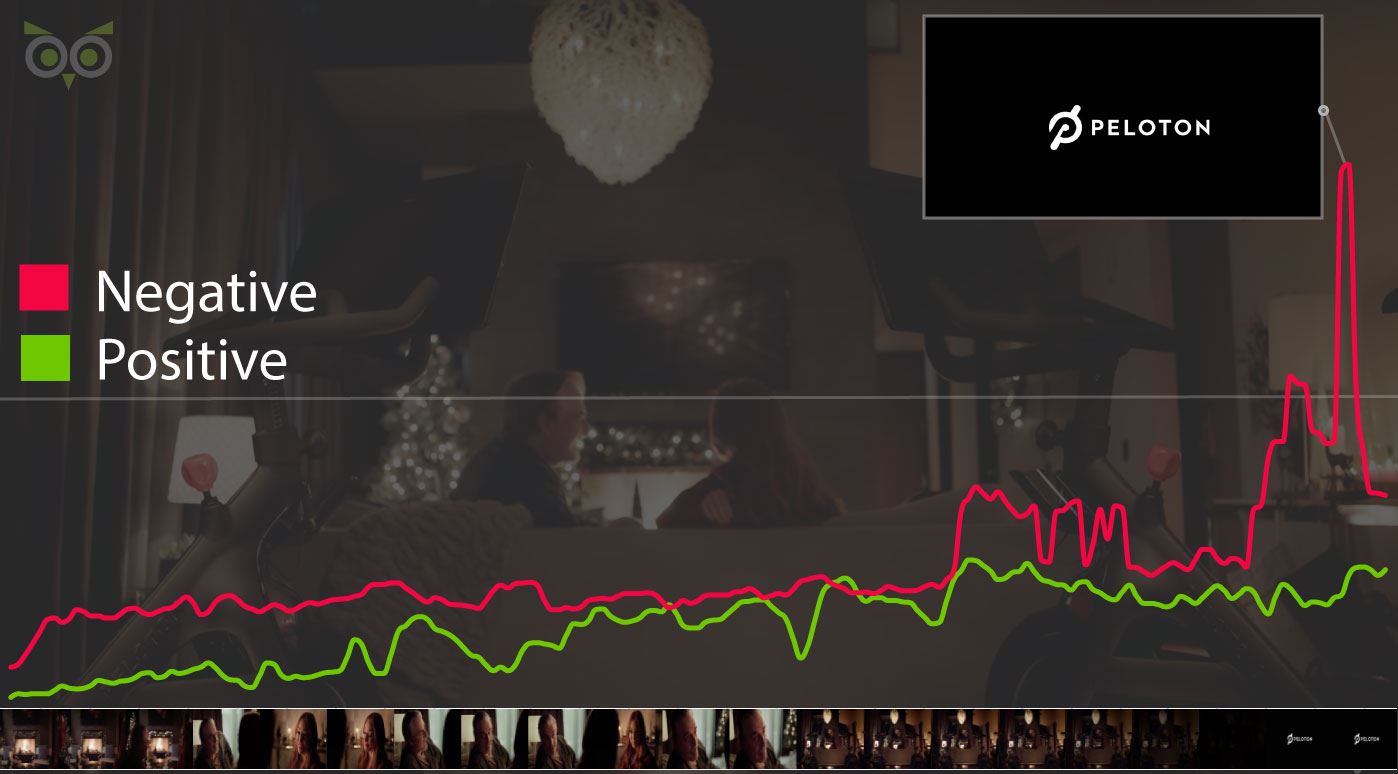 These negative emotions rose only among those who watched the new 'Sex and the City' series. And leading negative emotion here is skepticism.  The data indicates that viewers who lost a favorite character in the series don't get any relief from this ad. 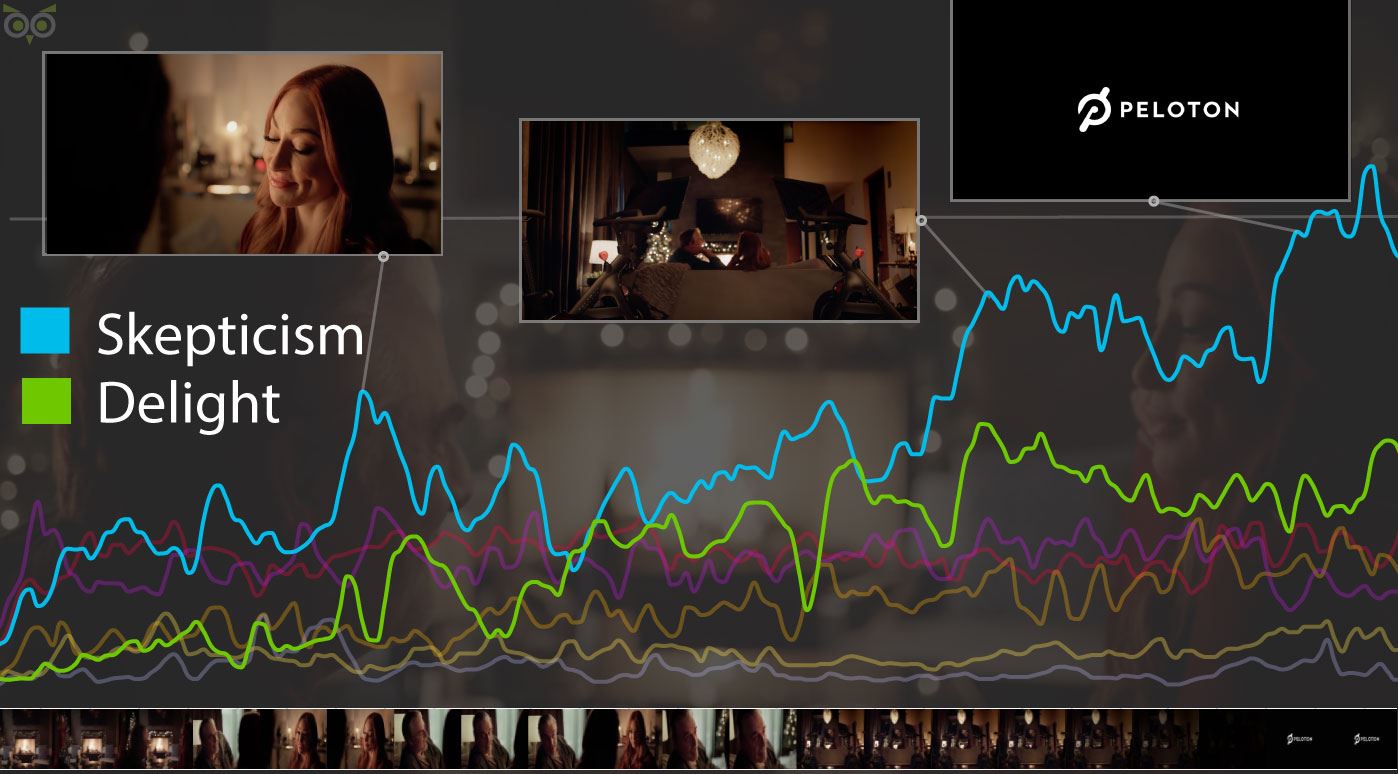 Not surprisingly, the new character (a young fitness instructor, Jess King) provokes more skepticism than anything else in the video. We also used CoolTool’s eye tracking capabilities to capture not only emotional impact but also the areas that experienced the highest visual engagement among viewers of the ad. 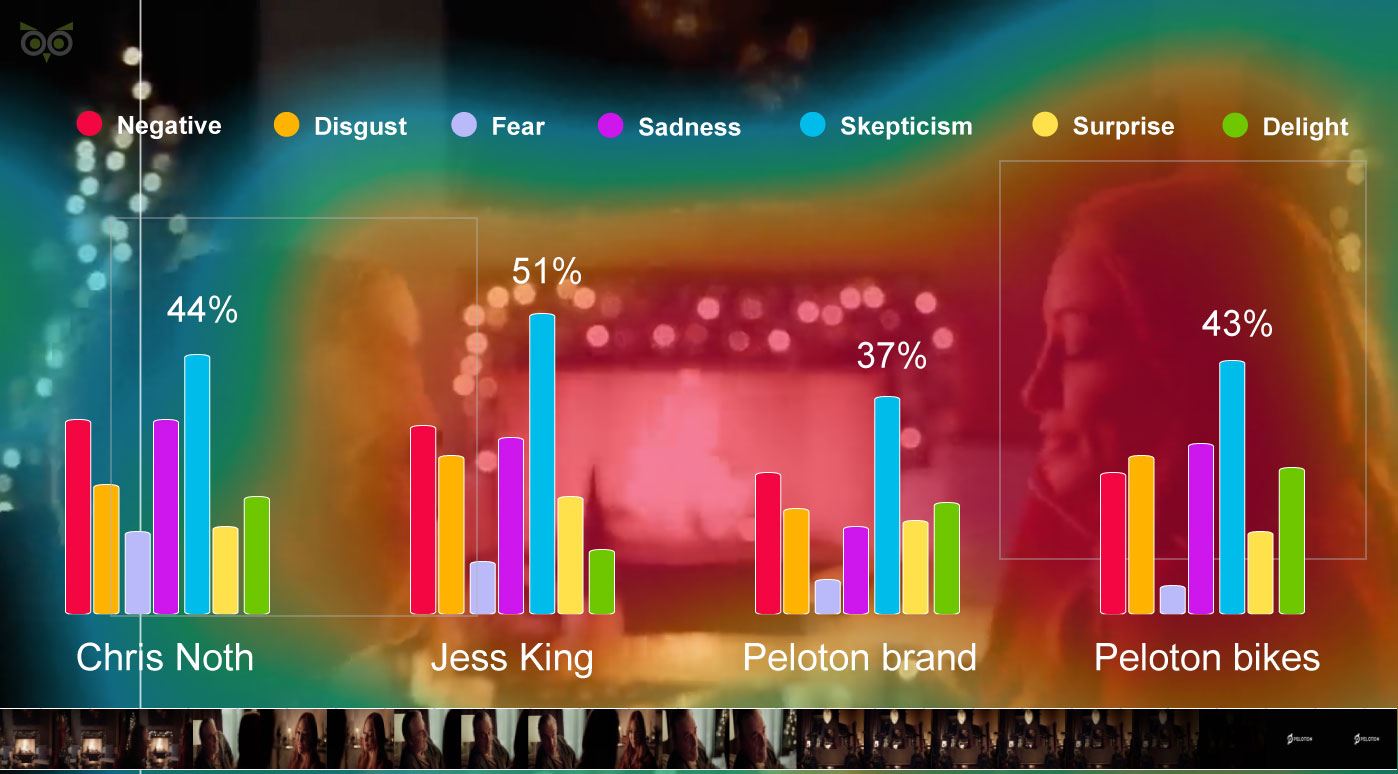 Women were also much more skeptical watching the ad than men. The main points provoking skepticism are the appearance of Jess King, the audio track describing how good for the health the cardio training is, and the logo showing in the end. Probably - it's just an assumption - skepticism appeared because viewers realized that it was just an advertisement and not a teaser for a new episode where Mr. Big is alive or maybe it's because of voice intonation - we are used to hearing such an official voice when listening to warnings about the side effects of drugs (so, this could provoke such unexpected implicit reaction). 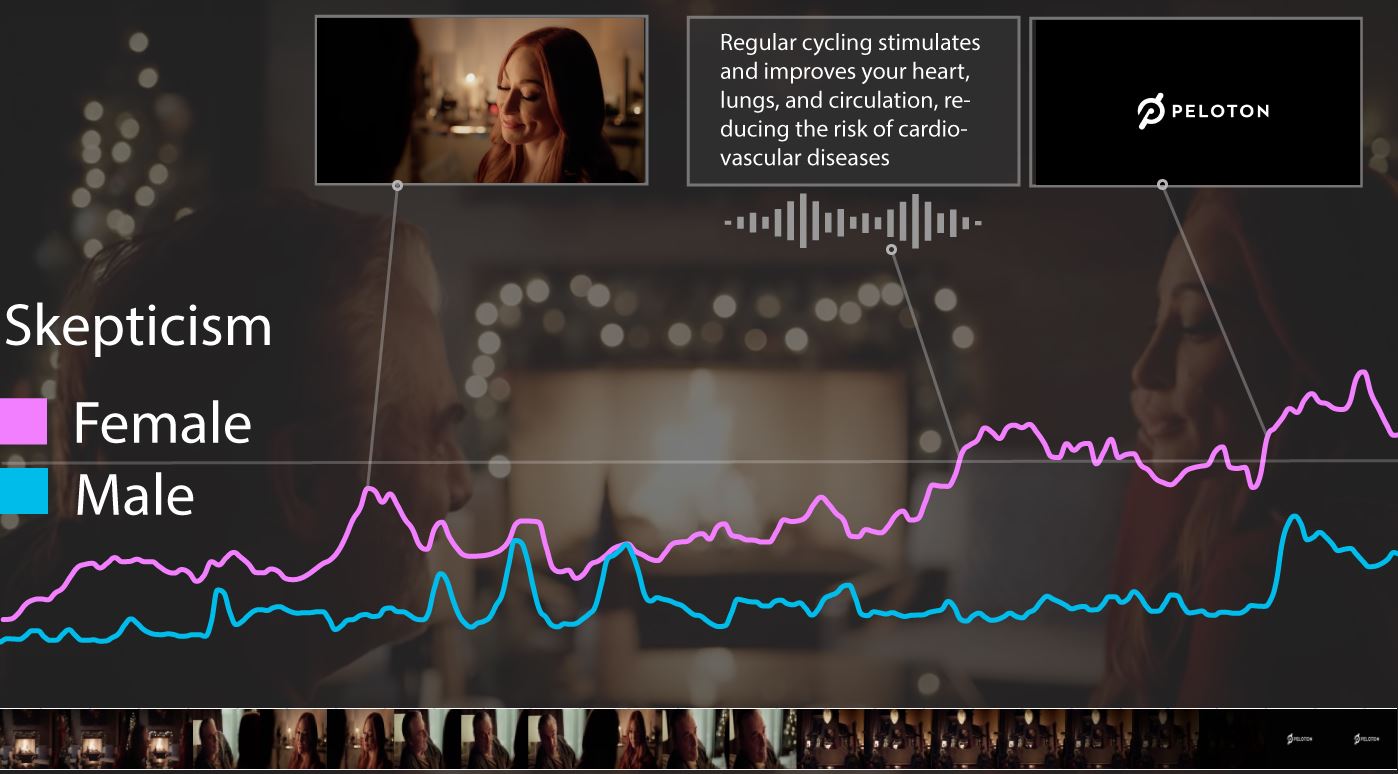 To take this further, we did subgroup analysis and discovered one group for whom this ad is most emotionally engaging. Those who didn't watch the new series actually perceive the ad more positively, reacting to content without negative emotions, responding positively to jokes (the overall intensity of these emotions is pretty low, though). 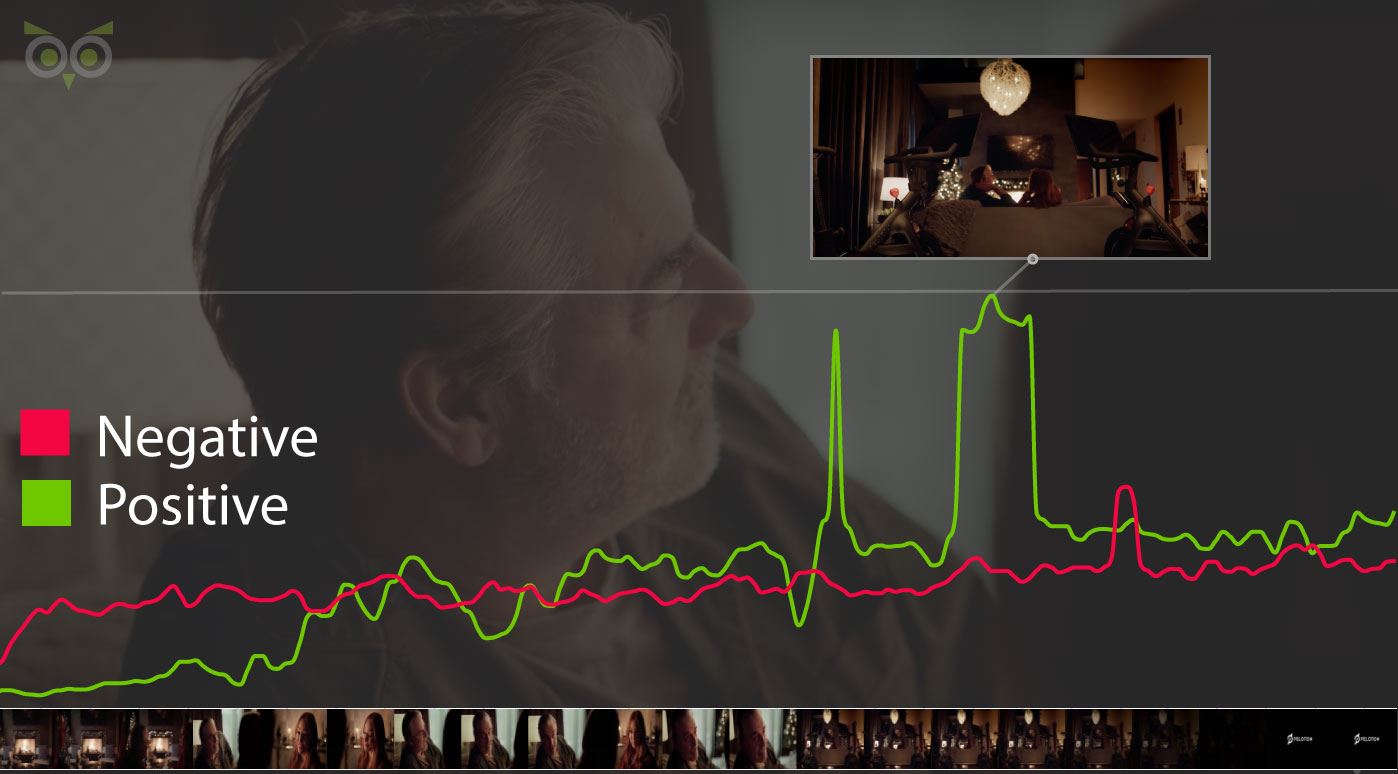 But even for this audience, the ad didn't improve the overall implicit attitude (emotional appeal) toward the Peloton brand and even made it slightly worse.

The lesson to learn...

This marketing story is fascinating. Did the Peloton team overreact? Flash reaction to a market situation is essential (remember, the Peloton team created this ad within two days only), but maybe it is better to spend one more day and test it? We advocate for this approach. CoolTool provides efficient tools that allow this type of research to be fast and low cost. We did this research in less than 24 hours using a very small marketing budget. Had we relied on survey results only, we would have come away with an inaccurate assessment of the impact on Peloton’s brand.  The nonconscious results led us to the moment of truth.

Thanks for reading and don't hesitate to share your thoughts and discussions with us.