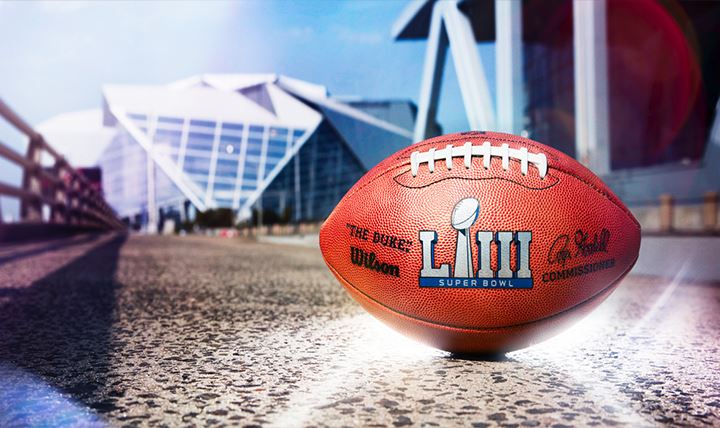 The Super Bowl (the annual championship game of the National Football League) first began 53 years ago and, these days, it’s more than just a sports game. It’s a reality show involving a battle between the world’s biggest brands.

Super Bowl games are the most watched television broadcasts in the US. Approximately 188.5 million people tuned in to watch the Super Bowl in 2018. So, it's understandable that the Super Bowl has become the golden time (literally) for advertisers to place their ads. Advertisers spend millions of dollars producing commercial videos and even more millions to air them on Super Bowl Sunday. This year, the cost of producing these adverts, to be broadcast during the game, reached, on average, a record 5.25 million dollars per video. Not bad, right? This is a real battle of the marketing giants.

All advertisers are acutely aware that they need to create an exceptionally alluring and memorable ad that thoroughly engages their target audience in order to sell more product. That’s why measuring the impact of their ads is of key importance. We’ve chosen three ad videos shown at the Super Bowl LIII that starred celebrities and tested them using neuromarketing technology to discover their secrets… Now we're ready to reveal the results of our study to you.

Three brands, six celebrities...what was the real impact of these ads?

Typically, businesses use traditional marketing techniques, such as surveys and interviews, to elicit consumer feedback. These techniques concentrate more on what people are thinking about rather than on how they feel. However, what people say and what they feel is often very different. It's better to gauge people’s responses while watching the ad than afterwards. To find out how the efforts of advertisers met expectations, we conducted a fascinating study.

In order to gather insights that are as accurate as possible, we used the following technologies:

Please note, we didn’t focus on making a detailed diagnostic of all tested ads (this is the subject of a unique methodology that we have in our portfolio). Our intention was to highlight the amazing opportunities available to measure subconscious consumer reactions.

So, let’s further analyze these amazing results! (The full version of case studies in pdf format you can find in our Resources section) 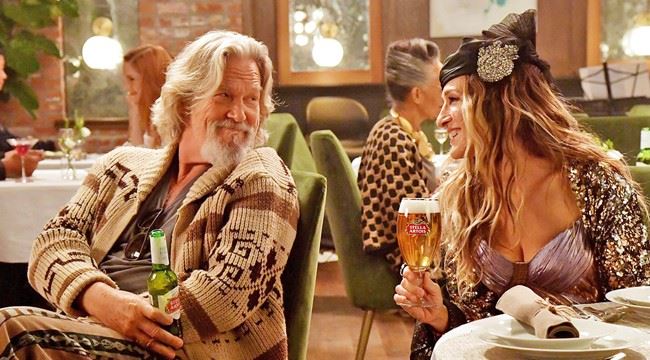 Stella Artois brought back iconic characters to change-up their usual and show how easy it is for anyone to #PourItForward and do good. Carrie Bradshaw from Sex and the City, played by Sarah Jessica Parker, switched from drinking a purely "female" Cosmopolitan cocktail to beer - the kind of traditional beverage usually associated with men. The “Dude” from The Big Lebowski swapped his White Russian cocktail for a beer as well. #ChangeUpTheUsual could be a good thing for a beer category, and this change could be beneficial for Stella Artois. Despite that fact that the beer category is typically connected with men, it looks like the main focus of this ad was on the woman. Let's see how much the perception of drinks has changed as a result of this ad. Did it #ChangeUpTheUsual?

“I’d like a cheeseburger, large fries, and a cosmopolitan.” – Carrie

Implicit tests reveal how people perceive something on a subconscious level. When we subconsciously agree with something, we react very quickly, without thinking much. If something contradicts our perception of things, we need more time to react to the external stimuli. It is a well-known stereotype - beer is for men. And the first part of the implicit test confirmed this hypothesis. The graph below tells us that people attribute beer as being a male drink a few milliseconds faster than female drinks. It means that the implicit connection of "man-beer" is stronger than the connection of "woman-beer". It’s worth noting that people went through the test before they got to see the Stella Artois ad. 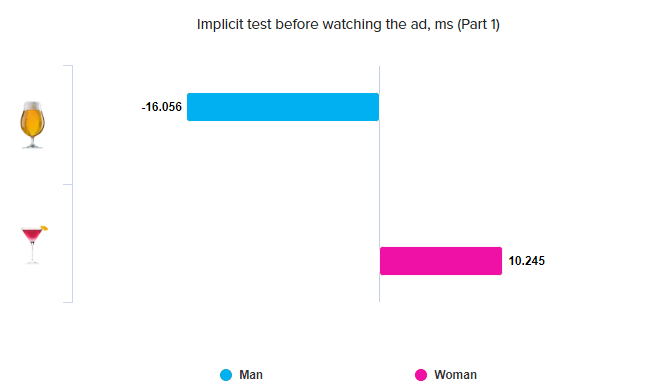 But look at how the results changed after watching the video. 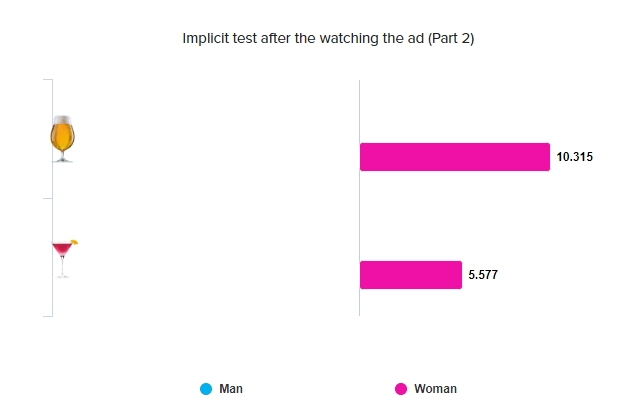 Of course, the belief that women don't drink beer is not absolute. And even at a subconscious level, some people associated beer with women as well. But the ad made this connection much stronger.

The graphs below show the segmentation of respondents by groups, depending on their perception of beer as a male drink and cocktail as a woman drinks BEFORE and AFTER watching the ad. For example, we see that the percentage of people who perceived beer as a purely "male drink" decreased from 29% to 17%. 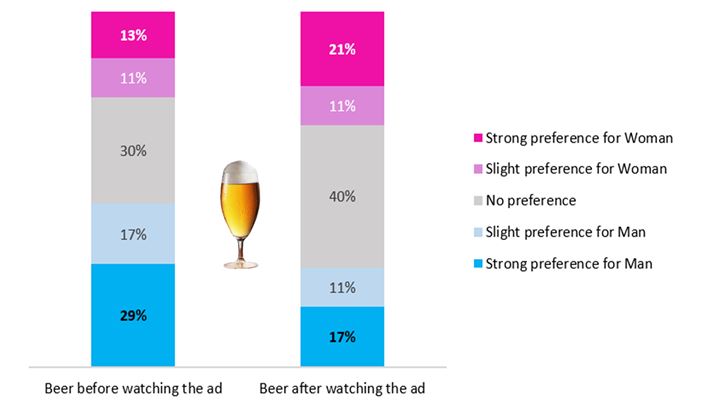 Therefore, this creative approach managed to break the stereotype at least a little!

This is amazing, really. This is how ads should work. And this is why it’s both fascinating and important to measure the emotions and implicit connections your ad provokes, makes stronger or changes. Bravo, Stella!

So, ladies, how about a glass of beer?:) 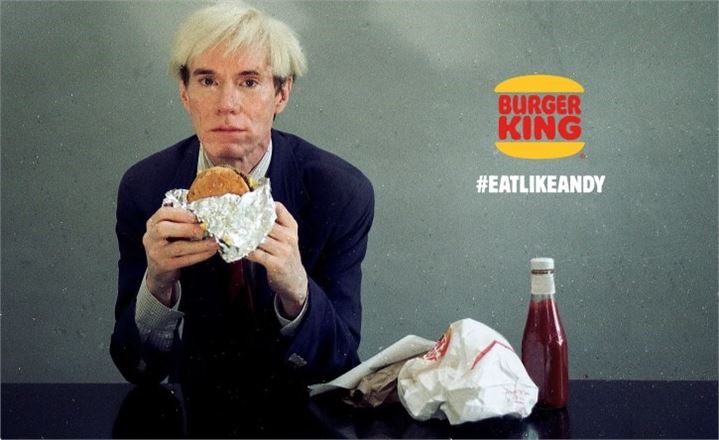 Originally, the video showing Andy Warhol eating a burger appeared in a visual narrative of 66 Scenes from America (Denmark, 1982). Burger King, with the help of DAVID The Agency Miami, got the rights to use the footage of Warhol. That’s why we’ve been able to watch this piece of art as part of a Burger King ad.

To be honest, using such a controversial celebrity in food advertising doesn’t, on the surface, appear to be the best idea. How much did the legendary Andy Warhol eating a burger inspire people to taste Burger King’s burger?

Well, let's see what came of it.

Let's turn to the results from AI-powered eye-tracking.

This ad doesn’t have a dynamic plot. And it’s understandable that people's gaze constantly moved across the screen the whole time. Most likely, this plot is not interesting for consumers, and they are bored.

See the full video with consumers’ emotions and gaze movement.

As for branding, all consumers noticed the package with the brand logo at the beginning of the video but this did not elicit an emotional response. 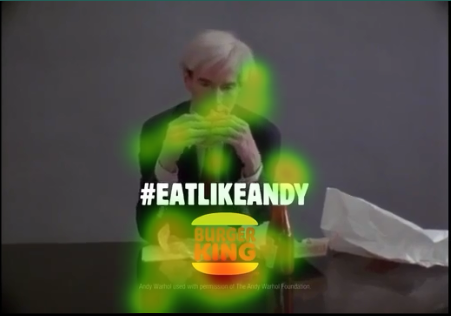 Everyone noticed the hashtag, #EatLikeAndy at the end of the ad, however, only half of those who watched the ad noticed the Burger King logo. 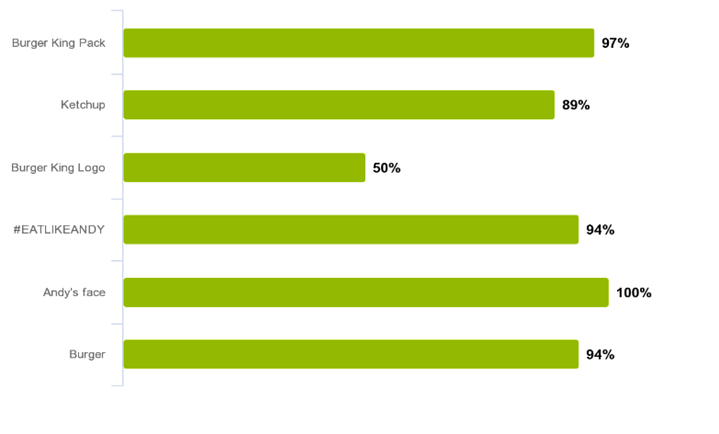 The overall effect was positive showing increasing positive emotions. Perhaps the brand logo would have been more noticeable had it been shown earlier on in the ad. 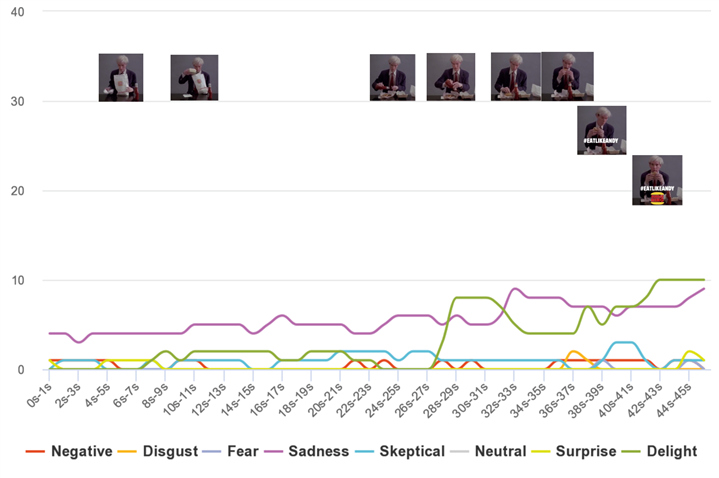 By the way, the number of consumers who were sad while viewing this advertisement increases at the moment when Andy tries to dip his burger in the ketchup. Are they remembering their own negative experience of trying to get a little bit of ketchup from such bottles?

In general, we may say that the ad is memorable but controversial.

What about you? Do you want to #EatLikeAndy?

Story #3. The battle goes on. Revealing the truth: Is Pepsi OK for both Pepsi and Coca-Cola lovers? 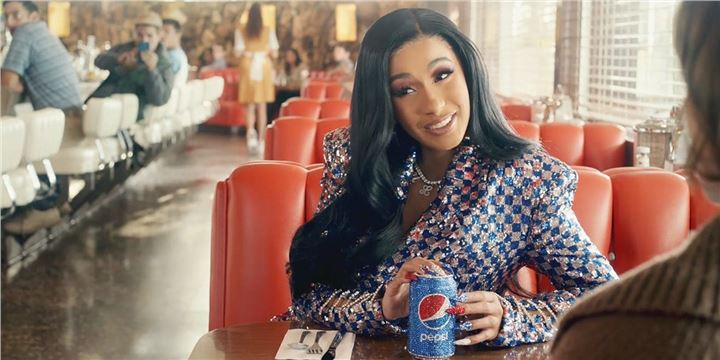 Even though Atlanta is the birthplace of Coca-Cola, Pepsi has consistently been a paying NFL sponsor since 2002. ‘People don’t buy for logical reasons. They buy for emotional reasons.’ (Zig Ziglar) This has been true for giant competitors like Coca-Cola and Pepsi.

We wanted to study the way in which the potentially funny Pepsi campaign, #PepsiSweepstakesOK dealt with the task of provoking positive emotions. Actually, for whom is #IsPepsiOk ok?

Unlike the Burger King ad, Pepsi chose a dynamic and funny plot for its storyline. Every new scene provokes an emotional response; positive emotions accumulate by the end of the video, and, overall, consumers end up watching on a positive level. It is, for sure, a great result, Pepsi! (Get free pdf on how and why measure consumers' emotional responses_

If we split the respondents by Coke lovers and Pepsi lovers, we see that only a quarter of Coke lovers found the ad to be cool.

This graph shows the range of negative emotions. Coke lovers were skeptical at the start of the video.

However, in general, both Coke-lovers and Pepsi-lovers perceived the video positively. 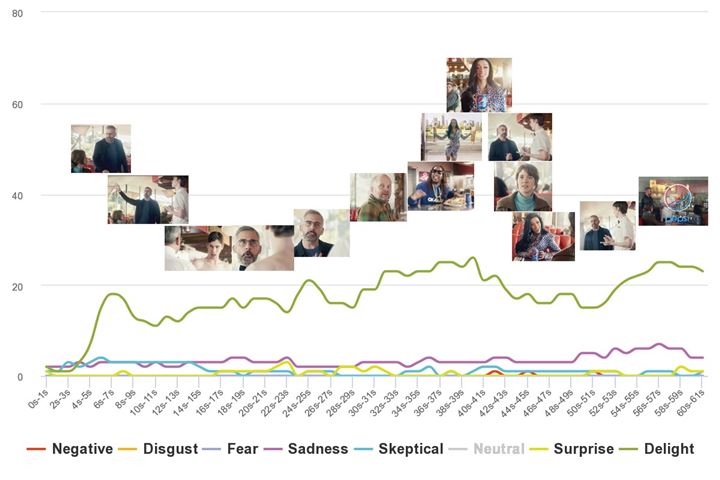 Cardi B impressed everyone - both Coke- and Pepsi-lovers. Her appearance in the video caused a flurry of positive emotions. We see that everybody likes humor and celebrities, no matter what kind of drink they choose in the store. Pepsi "presented" the constant rivalry between Coca-Cola and Pepsi to the audience by amusing everyone. This appeared to be the right approach as, on an implicit level, Pepsi will be associated with positive emotions (even for Coca-Cola fans that were skeptical while seeing the Pepsi can). Therefore, at least for this reason, (and thanks to Cardi B, of course!) #PepsiMoreThanOK.

In conclusion, we can say that even those viewers who answered that they did not like the advertisement, as well as fans of another brand, reacted positively to the appearance of celebrities in the videos. So, advertising is successful when it fulfills its function.

There were many great ads with sophisticated plots and interesting ideas this year. We’re looking forward to seeing what experiences and inspiration marketers will bring to the Super Bowl 2020.

Today, you can conduct your own neuromarketing study at CoolTool and get amazing insights on your commercials as well.

Eye Tracking Metrics: What are They and What They Say